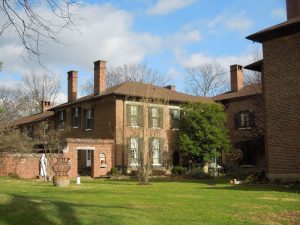 St. Joseph Retreat Center is a separate house from the Wheeling Center (located about 50 steps away from the main house.) Originally the center was the private home of William and Margaret Holloway. Mr. Holloway was a member of a prominent steel industry family in the Ohio Valley.  He and his wife, Margaret, traveled extensively and brought back many furnishings from their travels. 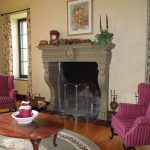 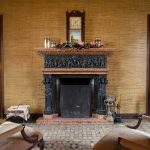 Some of those furnishings include the two original fireplaces located in both of the large downstairs rooms. The original paintings on the walls in both rooms were hand carried from Italy. The window rods are one of a kind from Wheeling Corrugating Company. Mrs. Holloway personally designed the tile floors found in many of the rooms in the house. The floor in the large wooden room on the first floor is hand-laid walnut with wooden pegs and wooden keys for stretching.

Originally the land was a working farm and included several out buildings; a smoke house, a fruit storage house (across from the garages) and a lovely bath house located near the labyrinth, (which was once where the swimming pool was located).

The original Holloway property was 40 acres and contained much land for farming. Several years ago the Wheeling Center purchased the adjacent 60 acres. Recently Ohio Valley Hospice has built a 12 bed in-patient center, called Liza’s Place on the back side of the property. There are now several walking paths included for those on retreat to enjoy the outside.